"The Jazz Loft Project: W. Eugene Smith in New York City, 1957-1965" an exhibition of photographs and recordings of some of the jazz world\'s greatest legends. 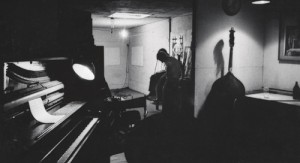 In the late 1950s, W. Eugene Smith lived and worked in a New York City loft building with an amazing list of inhabitants-famous jazz musicians, filmmakers, writers and artists. In photographs and audio recordings, he documented an era and rare moments with people such as Thelonious Monk, Zoot Simms, Norman Mailer, Diane Arbus and Salvador Dali, presented here in photographs, work prints, videos and audio.In January 1955, W. Eugene Smith, a celebrated photographer at Life magazine whose quarrels with his editors were legendary, quit his longtime well-paying job at the magazine. He was ambitious, quixotic and in search of greater freedom and artistic license. He turned his attention to a freelance assignment in Pittsburgh, a three-week job that turned into a four-year obsession and, in the end, remained unfinished. During this trying period, Smith moved into a dilapidated, five-story loft building at 821 Sixth Avenue in New York City's wholesale flower district.

The address 821 Sixth Avenue was a late-night haunt of musicians, including some of the biggest names in jazz-Charles Mingus, Zoot Sims, Bill Evans and Theloious Monk among them-and countless fascinating, underground characters. From 1957 to 1965, Smith exposed 1,447 rolls of film at his loft, making roughly 40,000 pictures, the largest body of work in his career, photographing the nocturnal jazz scene as well as life on the streets of the flower district, as seen from his fourth-floor window. He wired the building like a surreptitious recording studio and made 1,740 reels (4,000 hours) of stereo and mono audiotapes, capturing more than 300 musicians, among them Roy Haynes, Sonny Rollins, Bill Evans, Roland Kirk, Alice Coltrane, Don Cherry and Paul Bley. He recorded, as well, legends such as pianists Eddie Costa and Sonny Clark, drummers Ronnie Free and Edgar Bateman, saxophonist Lin Halliday, bassist Henry Grimes and multi-instrumentalist Eddie Listengart. Also dropping in on the nighttime scene were the likes of Doris Duke, Norman Mailer, Diane Arbus, Robert Frank, Henri Cartier-Bresson and Salvidor Dali, as well as pimps, prostitutes, drug addicts, thieves, photography students, local cops, building inspectors and marijuana dealers.

Writer Sam Stephenson discovered Smith's jazz loft photographs and tapes 11 years ago, when he was researching another Smith project in the archives at the University of Arizona's Center for Creative Photography, and he has spent seven years cataloging, archiving, selecting and editing these materials for a book and, along with other partners, a radio series, an exhibition and website.

The Jazz Loft Project at the Center for Documentary Studies at Duke University was made possible through the generous support of the Reva and David Logan Foundation, with significant additional support from the National Endowment for the Humanities, the National Historical Publications and Records Commission, the National Academy of Recording Arts and Sciences (The Grammy Foundation), the Duke University Office of the Provost, the Gladys Krieble Delmas Foundation, Ken and Amelia Jacob, and Kimpton Hotels.

The exhibition will close at the Center for Creative Photography at the University of Arizona in 2013.

IMAGES: Between 1957 and 1965 W. Eugene Smith made approximately 40,000 exposures both inside the loft building at 821 Sixth Avenue, of the nocturnal jazz scene, and of the street below as seen through his fourth-floor window. In a November 1958 letter to his friend Ansel Adams, Smith wrote: "The loft is a curious place, pinned with the notes and proof prints... with reminders... with demands. Always there is the window. It forever seduces me away from my work in this cold water flat. I breathe and smile and quicken and languish in appreciation of it, the proscenium arch with me on the third stage looking it down and up and bent along the sides and the whole audience in performance down before me, an ever changing pandemonium of delicate details and habitual rhythms."